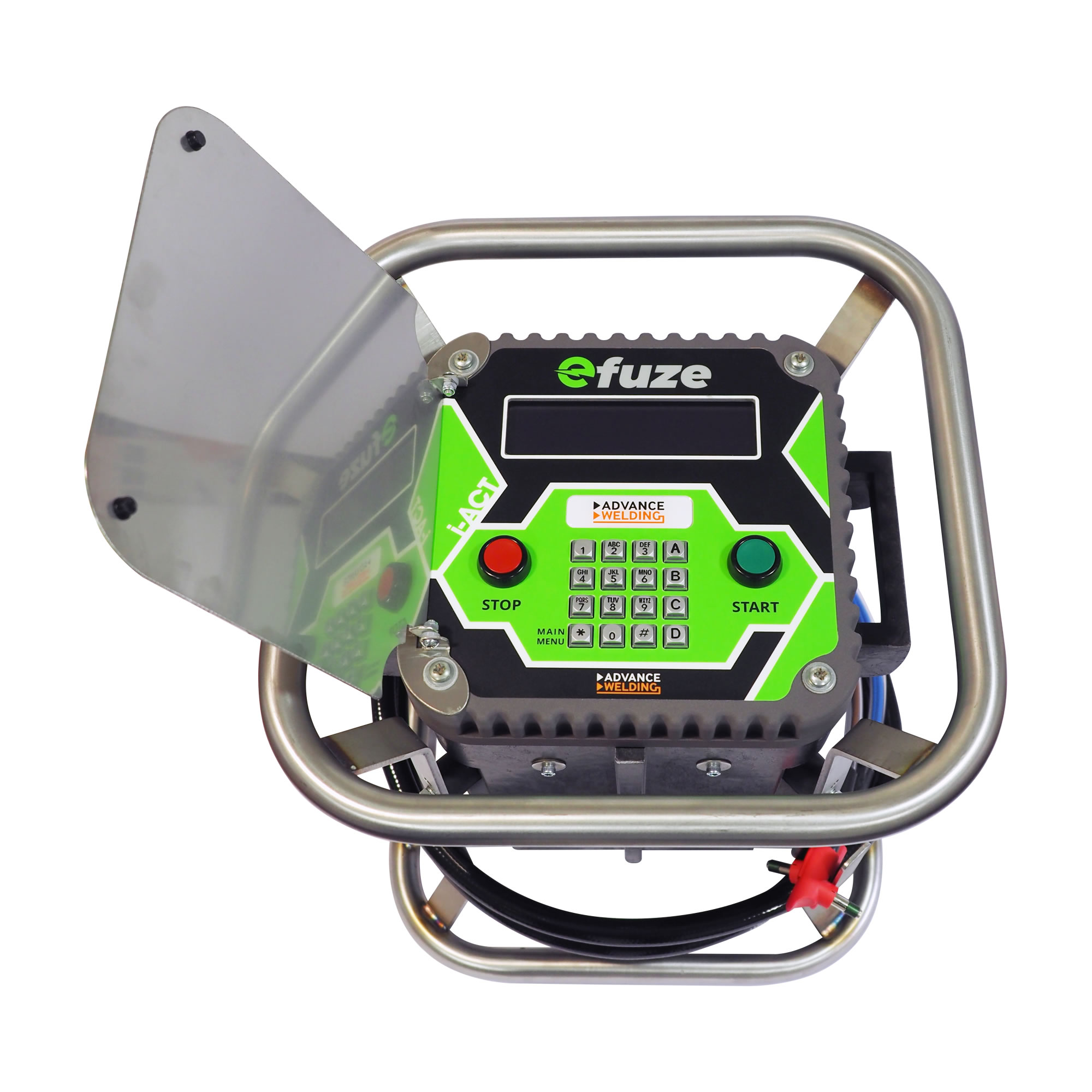 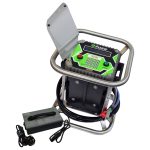 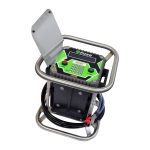 The iACT is a battery-powered electrofusion welder that CAN be used all day every day. This major advancement in welding technology offers a self-contained welding unit that needs no external power source to operate. This rechargeable welder has the power to silently weld over 200 couplers* completely CO2 free.

The iACT is designed to weld constant voltage electrofusion fittings suitable for low, medium and high pressure PE or PP pipe work systems from 16mm to 355mm diameter (1/2” to 14”).
The welding output of this equipment is a controlled voltage between 8V and 48V and it can weld fittings in Manual mode, or Barcode automatic mode. It has a data log memory of more than 2000 welds that can be downloaded using USB memory.

The iACT is manufactured in accordance with ISO 12176-2.

The iACT is fully approved for use on the UK gas network and has been approved to GIS/ECE1.

Made for Industry Sectors

What do you want from the perfect battery powered electrofusion welding machine?

Helping to achieve net zero by reducing carbon emissions of the welding process by 98%. Additional savings from carrying less weight in the van meaning less fuel used by vehicles.

The most powerful battery unit on the market, able to weld up to 355mm fittings. Capable of welding 200x 32mm couplers or 75x 63mm couplers on one full battery charge.

It only takes one hour to charge from flat to full, from mains power. Able to weld 80 mixed-size average fittings per battery charge.

Faster welding because there is no generator to transport and set up. Reduced job time.

Charging On The Go

On average, half of welding faults are caused by bad generators. Using our battery powered welder you are able to remove this potential failure therefore increasing reliability. To make things even better, the design is based on the proven reliability of the ACT range of welding machines. Technology that is built to last!

Not using a generator means there are no trailing mains power cables on site, removing Slip, Trip and Fall hazards. Manual Handling hazards are also reduced as the battery welder is 86% lighter than a standard electrofusion setup.

The equipment self-checks its calibration. This saves money by preventing bad welds and increasing the service interval of the machine.

What fitting diameters can it weld?
The iACT has been designed to weld electrofusion fittings from 16mm up to 355mm diameter.

How much does it weigh?
The iACT weighs under 20kg. Compared to a standard electrofusion kit, needing a generator, welding unit and can of fuel, this can be around 120kg, this is an 86% saving in weight.

How long does it take to charge?
Using the mains powered charger it will take just one hour to charge from flat to full. If you can’t wait for an hour, then the energy needed to weld a house connection can be charged in just six minutes.

Can I charge the unit on-the-go?
Yes, if the van is fitted with a 230V inverter then it can be quickly charged in an hour while driving between jobs. If an inverter isn’t fitted then it can be connected to the 12 volt auxiliary socket to charge. This 12 volt connection will take six hours to charge from flat to full but will also top-up the charge while travelling as well.

Does temperature affect the unit?
No, not in the UK. The iACT has been designed to weld between -10oC and +45oC. It will charge up from zero to +45oC.

How loud is the operation of the unit?
The iACT doesn’t need to use a generator so its operation is effectively silent. A standard generator can be up to 99 dB(A) and this can require special operating procedures to use it. The iACT removes all these restrictions.

Can it be used with phone-based data capture systems?
The iACT has been designed to operate with the Locate mobile phone app to provide a cloud based, web accessed, data storage system. Locate will also allow remote control of the iACT from the phone. If the operator is required to use Control Point, then the iACT is fully compatible with that system, and it can be made to work with many others already in the market.

How environmentally friendly is it?
Using a standard electrofusion welding unit and generator to weld one average year of work will produce around 344kg of CO2 from the fuel used. Charging the iACT from average electricity to do the same work will produce around 8kg of CO2. This is a reduction of 98% in CO2 emissions. If carbon-neutral green energy is used to charge the iACT then it can become net-zero with a 100% reduction. This saving doesn’t include the efficiency of the van which won’t be carrying as much weight so the CO2 saving will be higher.

What Health & Safety benefits does it have compared to standard machines?
The first benefit is with Slip, Trip and Fall hazards on site. There are no trailing supply cables so there are fewer trip hazards. The second is with manual handling. The iAct is around 10kg lighter than the standard ACT40 machine, making it much easier to carry, but the big saving is not having to move a generator. These can be 100kg and are a two-man lift. The potential for manual handling injuries is substantially reduced. The reduction in equipment weight also has an impact on the loading of the van, freeing up capacity to carry more efficient things like additional fittings.

Is the iACT operationally cheaper to run than a standard welding unit?
Yes. The cost of electricity to charge the iACT is substantially cheaper than the cost of fuel to run a generator. When welding a house connection: a saddle and a fitting, the fuel needed to run the generator would cost around 8 pence. The electricity needed to charge the iACT for the same connection is just 0.1 pence. This is almost 99% cheaper.

Is the iACT more productive than a standard welding unit?
Analysis of the field-trial data showed that because the operators didn’t have to use a generator, they didn’t lose time carrying it and setting up from job to job, allowing them to focus on the actual welding, making them more productive.

Does the flexibility of the iACT allow me to change how I work?
Yes. The reduced weight and increased productivity give you opportunities to think differently about how you work. You may not need a two-man team anymore, you may be able to use a smaller van with one man working.

How reliable is the iACT?
Even though the battery power is new technology, the physical construction, measurement control electronics and software are all based on the super-reliable ACT40 range of products. This is proven technology used in the rental market. Analysis of Control Point data shows that around half of faulty welds are caused by power supply issues, or bad generators. The iACT doesn’t use a generator so the welding process is inherently more reliable.

How often does it need servicing?
Servicing falls into three areas. The first is the electricity at work regulations which requires mains equipment to be PAT tested. The iACT is not mains connected so it does not need to come back to the workshop to be tested. The charger does but that can be more easily managed. The second area is calibration. The iACT uses smart calibration which checks the calibration every time it does a weld. This proves the unit is always in calibration, so the workshop check doesn’t have to be done as frequently. The third area is physical damage The equipment is lighter and easier to use so it won’t have as much physical damage as standard machines. This means the service interval can be extended out to two years rather than one.

What is the lifespan of the battery?
The battery in the iACT has been designed to last for at least 500 full charge cycles.
This, along with clever battery management technology means that an average to heavy user should easily get five years use from the battery pack.

I still need to carry a generator in the van so why should I use the iACT?
You may still need to carry a generator on the van to use a submersible pump or air compressor. Using the iACT allows you to carry a smaller generator that is better suited in size to the application. It won’t have to be ECE3/TIN12 spec meaning smaller and lighter. A lot of the operational benefits of not using the generator will still be achievable, such as increased productivity and greater weld reliability, even if there is a small genny in the van. This gives you operational flexibility

Why is there a significant price difference between the new iACT and the old ACT40 welding units?
As with all equipment, new technology is more expensive. Production volumes are lower so components are more expensive. The new iACT is also designed with additional features that have an initial purchase cost but substantially reduce the operational cost of the unit. Instead of considering the CAPEX price, you need to look at the OPEX or TOTEX price.

You may need to register with us to see all documents

I'm sorry, but you must be an approved registered member to view this information. Register here